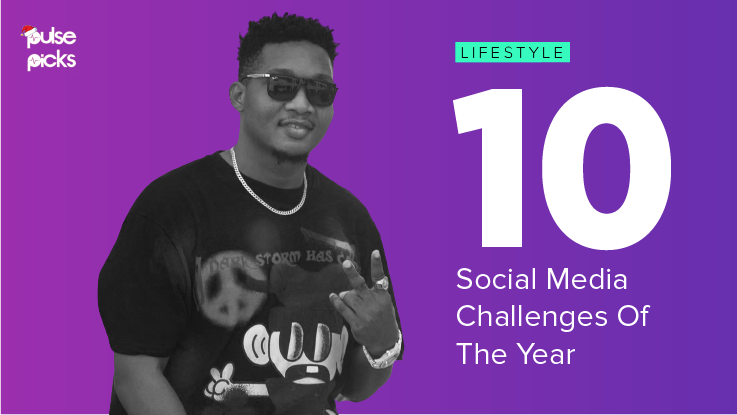 In this list, we look back on the biggest, most creative, most hilarious and raciest ones that captured the imagination of Nigerians in the course of the year.


Ckay’s ‘Love Nwatintin’ is that success story that kicks other success stories in the butt. This year, the 2019 song rose and rose and rose until it became an anthem all over the world, mostly on the back of the love it got on Tiktok and the dance challenge that propelled it to a much larger audience. Check out the Tracy Joseph dance routine which birthed the challenge.


The focus dance challenge caught fire on social media earlier this year off a delicious tune by producer Ajimovoix. Dancer, Hagman DC signed off the pointing dance move to that tune and soon everyone was pointing along to it. Of course, it became such a huge vibe that this list would be incomplete without giving it a deserved mention.


2021 saw hype men enter beast mode of supreme creativity. And an offshoot of that is how their chants and freestyles became catchy tunes that social media could hardly get enough of. ‘Wife material’ by Emmy Blaq is one of those tunes and the similarly-named challenge it birthed will be remembered as one of the hottest moments on Nigerian social media -particularly Tiktok – in 2021


Another Tiktok-birthed challenge that rode on the back of rapper Erica Banks’ song titled ‘Buss it.’


This was the earliest challenge of the year and it might as well be considered one of the raunchiest, seeing women from all over the world – including Nigerians, of course – throwing down a combo of the best glow-ups and sexy booty bounces all in the space of 30seconds or less. What an exciting time to be alive.


Another insanely provocative dance challenge that is distinct for its red light filter. This challenge got life from Paul Anka’s 1959 song; “Put Your Head On My Shoulder.” Participants in the challenge take a spot against a light backdrop which then puts the outline of their [naked] body in focus, bathed in the red light filter.


Social media challenges took an intense, even dangerous turn this year when people started stacking up crates so high, attempting to walk over the shaky assemblage. There were loads of falls and a significant amount of risk involved but that didn’t stop it from going viral as more as more people accepted the challenge. There weren’t many Nigerian participants, but Nigerians did vibe with it. A lot.


When a member of Nasir El Rufai’s entourage quickly rushed down from a car to open the door for the man who was to open the door of the governor’s car, he could never have guessed that what he did would birth another social media moment of 2021. But that was exactly what happened. As soon as that clip hit the internet, Nigerians never looked back. Even staffers at Pulse NG could not resist the urge to jump on the challenge.


After Joeboy released his melodious jam, “Alcohol,” it looked like it was going to be another hit song beautifully popularised by a TikTok challenge. The trend here was for participants to drench themselves in alcohol or other drinks but things soon got messy and weird when people began to upturn substances like palm oil, liquid soap, antiseptic liquid, etc on themselves. Joeboy had to plead with fans to quit the messiness and stick to the challenge in a healthy, responsible manner.


Not one of the greatest internet moments of this year, to be frank.


DJ Basplit and Hypeman BobbyBanks inspired this viral challenge that swept through Naija social media like a hurricane at the midpoint of the year with their song ‘Shedibalabala’. As the NSFW tune bops in the background, participants in the challenge are expected to bounce their booty wildly to the command of the song and trust Nigerians… they went ham on it.


This is the challenge to end the year. Another one riding on the growing popularity of hypemen tunes. This time Goya Minor & Nektunes put an Amapiano spin on the popular ‘Ameno’ song and social media just rolled with it, giving it more life and mileage.

The Subtle Ways Landlords Try to Keep Out Transgender Renters

DJ Horphuray teams up with UK Gospel Artist, Naffymar in “For Me”

Why cause trouble and run to your father? – Lexis Bill on Shatta Wale’s...