Home Entertainment A Naija Christmas: Rom-Com at its finest 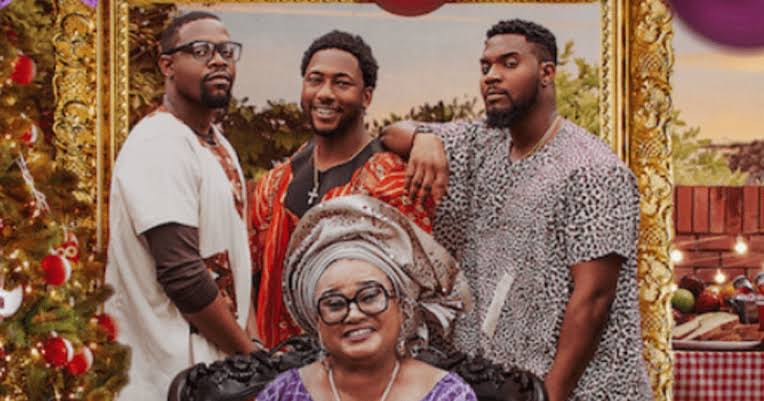 With a two hour run time, A Naija Christmas does not seem as long as it is, Considering its nifty ‘marriage against time’ plot line complemented with humorous performances from Rachael Oniga[God rest her soul], Kunle Remi, Efe Ewara, Abayomi Alvin and more.


The events of its premise, which features a playboy caught in the act, a failed public proposal, a concerned mother plight are building blocks of the story, and the backbone for the major character arcs, as Ugo, the eldest son will spend the rest of the film trying to piece his life together. Obi the second-born must decide who his heart belongs to; His manipulative ex-fiance ‘Vera’(Linda Osifo) or his best friend, ‘Kaneng’(Ade Laoye). While the youngest son ‘Chike’ whose motivation could have been better written, pursues married women one of which happens to be his mother’s PA.


In avoidance of following a Hollywood template, A Naija Christmas integrates elements of Nigerian culture to justify its title to a foreign audience but what makes the attributes of this film stick solidly together is the inclusion of high stakes under a ticking clock. The boys don’t just want to get married to satisfy a plot alone, there are also grave financial and emotional ordeals looming ahead if they don’t.


In addition to that, the exploration of the pressure on Nigerian adults to get married at a certain age range, The firstborn to second-born banter between Ugo and Obi, a big Big proposal failure and the infusion of Social media virality. The ‘Bestie’ to ‘Lovers’ dynamic between Obi and Kaneng, and the reflective guitar chords complemented by Cavendish Music’s A Dream soundtrack are perfect to balance the serious reality of what is at stake while maintaining the humour of it all– Are kaleidoscopic bulbs, serving as beautifying elements on this Christmas tree of a movie.


For a first Nollywood Christmas outing, I’d say Kunle Afolayan’s holiday special is Nollywood at its finest but, that would be an overstatement. However, A Naija Christmas is everything a Rom-Com needs to be and more that it earns rightful acclaim as a memorable holiday watch.


A Naija Christmas is streaming on Netflix.