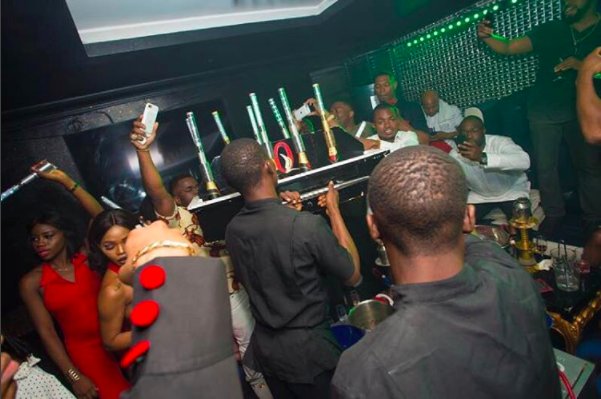 As the gothically-clad masked undertakers dramatically brought in the four-foot casket while walking slowly, the DJ suddenly began to play ‘Ameno’ by E.R.A. As if everyone at the club knew what would ensue, they whipped out their phones to record for Snapchat and Instagram stories. Alongside the casket and the soundtrack came fireworks.

Speaking over the phone, the DJ on the night tells Pulse Nigeria that, “The song is easily suited to this occasion. It’s dramatic and slightly dark. It’s a no-brainer that we use it for the ‘casket procession.’ I only recently jumped on it myself, but the practice became popular on social media around the turn of 2021.”

In June 1996, ‘Ameno’ was released by French new-age project, E.R.A as a single off their eponymous debut album which dropped the same year and was re-released in 1998. The track was written by Eric Levi, who put the project together and conceived the idea.

The song is a unique brand of chamber music, with classical orchestra and ethereal choir themes.

The band and their songs like ‘Ameno’ are similar to acts like Enya, Gregoria, Enigma, Vangelis, Alphaville and more. Their vocals feel suited to grand orchestral stages and borrow from acts like Lisa Gerrard, Faun, Sacred Spirit and even the music of Hans Zimmer – for their suitability to movie soundtracks.

Euronet describes the music as, “a weird mix of Gregorian chant (performed by the English Chamber Choir), rock and disco.”

While many have argued that ‘Ameno’ is gibberish and doesn’t identify with any language, several sources have claimed that E.R.A’s songs are heavily delivered in English and Latin. E.R.A is also influenced by 13th century doctrines of the French heretics, The Cathars, a conceptual dystopian metaphor for the band’s existence.

But in fact, ‘Ameno’ was delivered in pseudo-latin with lyrics that don’t exactly have any meaning. Nonetheless, ‘Ameno’ means ‘pleasant’ or ‘pleasantly.’

Wikipedia reports that, “The vocals [on ‘Ameno’] are performed by Guy Protheroe and Harriet Jay. Eric Lévi played keyboards and programmed it, whereas Philippe Manca played lead guitar, bass and drums. The choir rendition is by The English Chamber Choir.”

At some point, E.R.A became the best-selling French export with the help of ‘Ameno,’ which has since sold over eight million copies [or equivalent] worldwide. The song has been recreated in several forms including as the lead sample for Olamide’s classic rap smash, ‘Voice of The Streets.’

The song is known for its tendency to connote awe, calmness, drama, spirituality, metaphysics, emotion and even anticipation. It has also been used for choreography. Hence, why it’s currently making the rounds in Nigerian clubs.

Around the turn of the 2010s as internet fraud became the toast of the Nigerian underworld, young Nigerian millionaires who earned their money through this diabolical means would storm clubs to engage their vanity, debauchery and hedonism.

Part of their modus operandi would be to go in numbers – preferably in convoy, accompanied by girls while they smoke shisha and order in ‘bottles,’ which is a codeword for – relatively – expensive bottles of liquor, liqueur, spirits and wines.

As you know, ‘bottles’ get more expensive at clubs as against their normal market prices and most people can’t afford them.

When the bottles start rolling in and money starts to count, clubs would tickle the vanity of the ‘spenders’ with music, which later evolved into the ‘casket culture,’ which is a special treatment of carefully curated drinks. It is meant to separate the regular clubgoers from the high spenders – again, tickling their vanity duh.

These caskets would usually be brought out by specially-dressed undertakers and the size of the casket would depend on the class and even location of the clubs. Some are standard size while some are smaller.

Some people have also speculated that ‘casket culture’ was an attraction for ‘yahoo boys’ due to the spirituality of death that’s attached to it. Many of these boys are believed to be diabolical. Those claims aren’t exactly accurate because some caskets just carry that tag, they don’t exactly look like caskets, even though all caskets come with eerily-dressed ‘undertakers.’ Those caskets just stand for the drinks that are about to ‘die.’

Jerry Shaffer is Hennessy’s official hypeman and Bad Boy Timz’s manager. In the 2000s, he started going to clubs and founded an Abeokuta club with his older brother around 2010.

“‘Caskets’ are just a strategy of ‘special treatment’ for high spenders, like perks on a cadre of tickets at an event or concerts. It separates ‘spenders’ from ‘spenders’ at clubs [laughs],” he tells Pulse. “Over the last decade, when the bottles and caskets would start rolling in, songs became necessary to mark the occasion.”

“First it was songs like the Champions League Anthem and then Undertaker’s classic WWE theme song and now, it’s ‘Ameno,” he continues. “You can literally see the similarities between those three songs; they are all what you might deem to be ‘spiritual’ songs. They bring all the drama, they are different and they catch your attention. It’s just club culture, you know.”

How did ‘Ameno’ become the new soundtrack?

According to Schaffer, clubs are now finding unique ways to entertain, celebrate and group their ‘spenders’ into cadres of special – or lack thereof – treatment for the moment ‘bottles’ start rolling out. Shaffer adds that in the middle of the pandemic, Club VICTORIA hit the jackpot as the first club to use ‘Ameno.’

“They would dress their waiters in all these Egyptian outfits as they were trying to find unique modes of service like everybody else,” he says. “They were the first to use ‘Ameno,’ if memory serves.”

Since then ‘Ameno’ has become known as ‘Dorime’ to the Nigerian mainstream in line with the opening lines of the song. Everyday of the week, there is one story or another about the song, the best of which is a tweet about a bunch of boys getting angry because a DJ didn’t play ‘Ameno’ to tickle their vanity after they ordered ‘bottles.’

While the Champions League anthem and Undertaker’s WWE Theme song were mainstays of the Nigerian club scene, none quite had the crossover relevance and popularity of ‘Ameno.‘ When its run ends, its safe to say that another ‘dramatic’ song with classical elements will be installed.

However, DJ Flaps notes that we are likely to see a decentralization of dramatic songs with elements of classical/chamber music after the era of ‘Ameno’ ends. He feels like clubs will try to be unique to each other, thereby their ‘bottles’ soundtracks will be different.

Nkechi Blessing says she hasn’t gone under the knife

NdaniTV’s Rumour Has It returns this June!