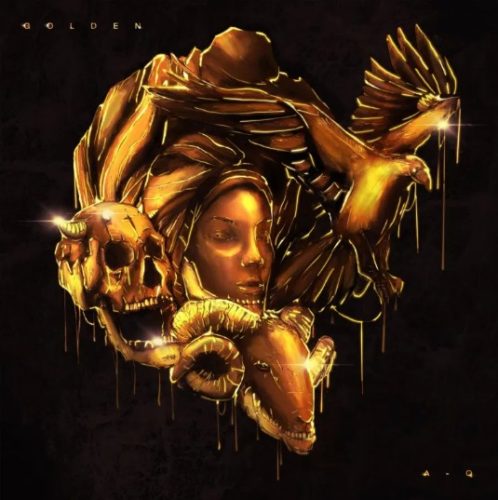 On the 7-track GOLDEN, which he perceives to be an album – not an EP, AQ portrays everything he’s always wanted to represent and projects the tone he’s always wanted to embody. Thematically and topically, ‘GOLDEN’ is also the perfection of topics that AQ has always canvassed with his music, albeit with grown perspectives.

On ‘Blessed Forever’ featuring GoodGirl LA, AQ rapped about his fears that might not see his sons, especially after seeing two brothers and father die. But on ‘HeLa,’ he raps rejects death as a person on God’s time.

He might have been in competitive comfort on ‘God’s Engineering’ and in his element on ‘The Live Report,’ but on ‘GOLDEN,’ he finds his centre, denounces unimportant things like beef, counts ‘Abraham’s Blessings’ and simply wants to ‘Breathe.’ Even the self-censorship of ‘Read The Room’ points to a man who has something to lose.

On ‘Hardwired’ which projects the album’s DNA of calm elegance, sensitivity and introspect, AQ raps that “I don’t rap no more, I make statements,” and he is right.

Since he featured on Jaypachino’s The Pachino Story, AQ has been talking, not exactly rapping. That’s probably why most tracks on ‘GOLDEN’ have no hooks. In a way he’s like Dave Chapelle. The great comedian simply talks these days, instead of creating sketches – even though people still find him funny.

‘GOLDEN’ is the perfection of what AQ meant to project on Blessed Forever, almost like his hero Jay Z perfected Kingdom Come with 4:44.

Also like Jay Z, AQ gets into that elder statesman bag, where he plugs his strides – Teeling, Blaqbonez and more – in the music without sticking them in a listener’s face.

He uses ‘Hardwired’ to deliver lines like, “...Reminiscing when I wrote those songs from Frank’s basement, now I run laps around these tracks for my amazement/Chilling with a bottle of Teeling, I got my own drink…”

While his flow remains razor sharp, he has stopped rapping like he has something to prove or like he wants to outdo anybody or even outdo himself on previous quality albums. All of this is related to the success he’s found over the past few years with his music and in the music business.

While ‘GOLDEN’ is Adult Contemporary Hip-Hop, it’s not grown man raps and that suits AQ’s brand as a “young” OG on the third cycle of his career. Yet, he bars harder than ever on ‘GOLDEN.’

Even his album art is different – more arty. Designed by Joey Oputa – also known as ShutterBug, the art reflects AQ’s thematic and topical base for ‘GOLDEN.’ It contains four distinct elements; a ram, a bird and a screaming skull, all interlinked by the woman.

At the nucleus of ‘GOLDEN’ is ‘System Failure,’ a track from which everything AQ discusses on the album flows – to every problem or probe, there is a fundamental causation and a result. He sees ‘System Failure’ as both.

It is also the completion of ‘Political Science,’ AQ’s socio-politically charged track from the Headies-nominated Rose.

AQ “blame[d] it on the government” on ‘80’s Baby’ also off ‘Rose,’ but now he’s grown to understand that bad governance is a symptom of ‘System Failure.’ As the nucleus of ‘GOLDEN,’ AQ unintentionally projects ‘System Failure’ as the cause for #EndSARS, which in turn created the heroes that AQ celebrated on ‘Shoot The Messenger.’

A ‘System Failure’ also is why AQ, a prodigiously talented rapper had to become “an underground rapper with a big mouth” and it is why he became ‘Hardwired.’

In a lot of ways, the damage caused by a ‘System Failure’ seems represented by the skull.

Either he named ‘Rose’ after his mother or makes ‘Devil Is A Woman’ on Son of John or blocks his sister on ‘Intro-vert,’ AQ’s music has always centred women. On ‘GOLDEN,’ AQ celebrates the women of Feminisct Co on ‘Shoot The Messenger.’ He also wanted the Nigerian government to learn a thing or two from them and put more women in power.

With a heavy heart, he also references how his mom lost two sons – one two cultism-related violence at the University of Lagos. But in his art, he places the woman at the centre because the woman is the origin of life – for better or worse. The elements represented on the art either stand on her head or close to her body.

If AQ once titled a song ‘Devil Is A Woman,’ ‘GOLDEN’ might have him agreeing with Ariana Grande that ‘God Is A Woman.’

On ‘Breathe,’ he also raps about a daughter whom he hopes keeps his name, Bani. This is in like with feminist realities.

A bird can be beautiful as a nightingale or as carnivorous as an eagle or crooked as a vulture. The logo of Twitter is a bird and the platform propels needed conversations, pressure groups as well as gender wars, cancel culture and call out culture, which inspired AQ to ‘Read The Room,’ propelled by Obama‘s monologue, instead of going H.A.M.

One one hand, Twitter has morphed a vulture; a scavenger that sometimes preys on mistakes, denigrates free speech and promotes censorship and conformity.

But on the other hand, Twitter documented the events that AQ celebrated on the two-way ‘Shoot The Messenger.’ Hence why Shutterbug’s representation of a bird in that art might be a bit of an intentional contradiction.

Nonetheless, AQ dares the wrath of the women he avoided on ‘Read The Room’ with the line, “Like the way I am raping these beats, you should get the FemCO…” on ‘Hardwired.’

When God tested Abraham in the bible, he ended up giving him a lamb to sacrifice instead of Isaac. Jesus Christ is also referred to as the Lamb of God and God as a Shepherd of his flock. Sheep and lambs are known to signify peace and they represent the Christian themes on ‘GOLDEN.’

If we know anything, it’s that AQ holds his Christian faith close to his chest. A revealed by ‘HeLa,’ he sees himself as Moses, a man on God’s mission.

On ‘Abraham’s Blessings’ AQ’s heart is filled with gratitude as he raps, “For 75 years Abraham used to be Abram/Waited for God’s call now it’s game time/Delay was not denial, my life is an example/When trials become triumph kept my faith in the bible… My winning streak is coming with clean sheets…”

If ‘God [Wanted Him] To Be Lit’ on Crown, before he experienced ‘God’s Engineering,’ AQ counts his ‘Abraham’s Blessings’ on ‘GOLDEN.’

With his board game, BeatsByJayy has now ascended to become Nigeria’s No. 1 Hip-Hop producer in Nigeria.

In the end, the only real critique for this album is its length and it’s not big enough to be a real critique. If ‘God’s Engineering’ is AQ’s essential album, ‘GOLDEN‘ is his best body of work yet.

Wizkid's 'Made In Lagos' gets silver certification in the UK, as 'Essence' gets gold...

Official Lyrics To ‘Scatter My Head’ By Guchi

Davido spoils himself with Lamborghini Aventador worth N300M for Christmas