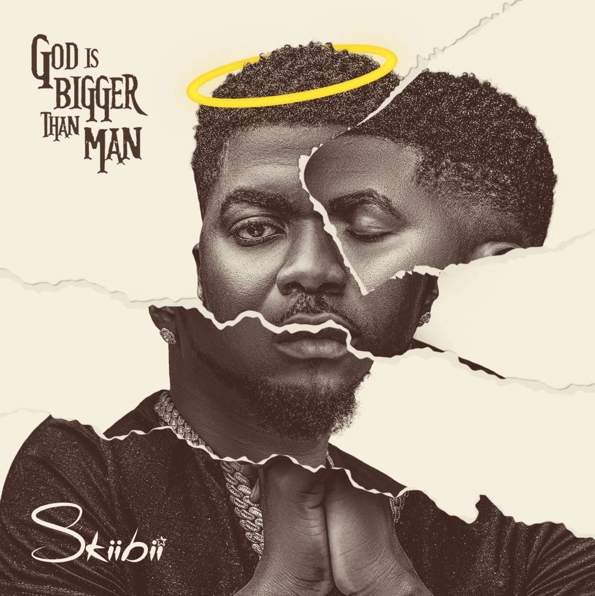 Immediately, he changed his own narrative and crowned the mega success of ‘Sensima’ by purchasing his first house. He had used his rent to promote ‘Sensima.’

While some people will focus on the infamous news of his death those years ago to bant, Skiibii didn’t just come from nowhere. He has always released bangers, but they never popped for whatever reason. Since the lockdown, Skiibii has once again slowed down. He has released dope records like ‘Banger,’ ‘Are You Vhere,’ and ‘Bygone,’ but they just never popped.

Regardless, Skiibii went ahead to release his debut project: a 7-track EP titled God Is Bigger Than Man, which is a nod to his storied journey and his continued tendency to make money.

The EP features moments of relatable, stark honesty. Skiibii chats about purchasing his house, and delivers an ode to peace of mind and his love for family on ‘Money Calls.’ He also flaunts his range on the ill-advised ‘Bygone,’ which features Dej Loaf, a hasty decision, seemingly born of a desire to go ‘international.’

‘If I Ever’ is an obvious standout record, it packs a punch and it lands it like the unbeaten Anthony Joshua. The mid-tempo record merges R&B essence with Afro-pop essence and washy lamba, that only Crayon and Skiibii can conjure. Its production also reverberates depth and soul, elevated by those distinct riffs that dropped around 00:10.

Skiibii is at his best whenever he discusses love or the realities of his life. While ‘Baddest Boy’ and ‘Tinga’ packed a punch, they simply lacked the intensity to land it. Thus, Skiibii looks like a jaded boxer in his 6th round. ‘On G’ and ‘Ma Doubt E’ are simply forgettable.

To Skiibii’s credit, his EP actually has a sonic cohesion, rooted in Afro-swing. It also involves some impressive creative points, revealed by the use of popular splice samples on ‘Money Calls‘ and ‘If I Ever.’

It’s then tied by Skiibii’s unique delivery/technique, which involves a creative use of words and adlibs, which become memorable words.

It also shows that he had a clear headspace while he conceived the EP. But the music just doesn’t match the clarity. While Skiibii might go ahead and garner hits from this EP with the right brand of aggressive promo, this isn’t a memorable EP. It has its plus points. But they couldn’t significantly elevate the experience that he craved.

‘If I Ever’ is a brilliant record, but one amazing track from seven isn’t exactly a great record.

Listen To All Six African Remixes for Jinmi Abduls’ ‘Jowo’