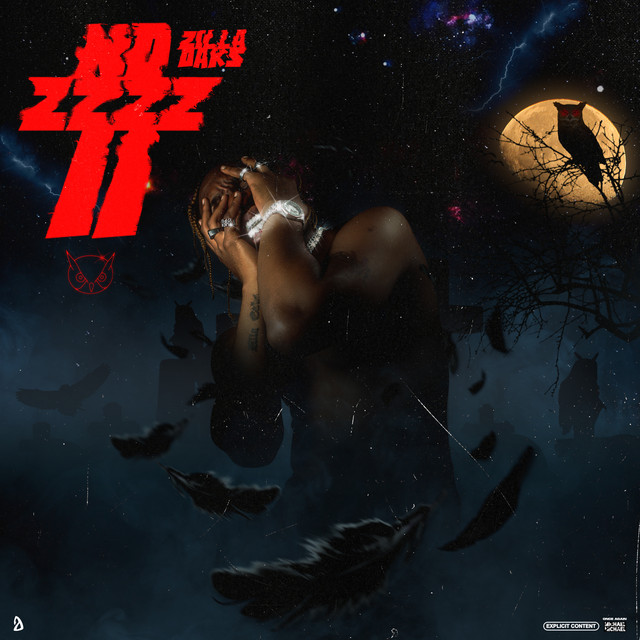 His confidence is almost as high as his talent, but so is his ability to project truth. Sometimes, you find him openly claiming credit for a word like “omo” on Trap records. Other times, you can find him on his albums speaking with conviction that might make you believe him if he said he was coming to kill you in 10 seconds.

No ZZZZ 2 isn’t exactly a topical or thematic difference from No ZZZZ. The difference between both albums is that with growth, expansive life experiences and good tidings, Zilla Oaks has more topics to articulate.

On ‘No ZZZZ 2′ which drops after Oak’s run of effortlessly killing features and three dope singles, there’s also subtle confidence in his voice; almost like he’s finally seeing the braggadocio he was trying to project on ‘No ZZZZ.’ He also references that reality on ‘Still Up’ as he raps that, “2019, took time to build/Went through hell just to get to the top…”

On his sophomore album’s second track ‘Still Up,’ he gladly and believably raps about a conversation with his mom, the new deal he lowkey signed and his origins. On the highly introspective ‘Pain Away,’ he also raps that, “With no sponsors, limited options, now look who prospered yeah…”

While Zilla Oaks has a reputation for the insanely amazing beats – which he repeats on ‘No ZZZZ’ – he raps on and as a potent feature, a few cynics usually argue that they don’t think he says real stuff, but that’s untrue.

Those cynics only have such sentiments because they don’t listen to Oaks’ words and lyrics. He speaks truth as much as anybody; the difference is that he speaks his truth differently.

Where Kendrick Lamar makes a record like ‘FEEL’ on that type of beat, Zilla Oaks would make a record like ‘Pain Away,’ with Trippy instrumentation because his reality is different. He would also lace it with hints of his reality where he relies on alcohol and drugs as a coping mechanism for pain and his demons.

More importantly, he touches on his fears of an early grave, inspired by insomnia from constantly grinding. On ‘RIP,’ he also celebrates and bemoans the death of his late friends while declaring his wish to “Live fast and die slow,” in an almost subtle prayerful fashion.

Even on the single, ‘Ogini,’ PrettyBoyD-O still spoke about his aggressive nature towards his hustle, as a Port Harcourt boy who can’t afford to fail in Lagos. He also spoke about brutality, but some people will think he’s saying rubbish due to how he says things.

That remains the truth, but sometimes it feels like Oaks is self-indulgent when it comes to his vices. On ‘Wagwan,’ he says “I’m gifted, I’m too sadistic” almost in celebratory fashion.

While ‘No ZZZZ 2’ doesn’t exactly have a visible nucleus or nexus, one can assume that Zilla Oaks and his reality represent the nucleus/nexus of this album and boy, does this album fly off the hinges with its best tracks?

Across 16 tracks, Oaks mostly presents the density of different sides to himself as a person and his excellence as an artist.

The sequencing of ‘No ZZZZ’ is also slightly clear. While the album effortlessly achieves topical progression and cohesion, it took a different approach to achieve topical/thematic progression/cohesion. The opening four tracks present Oaks as a defiant young hustler who is finally seeing his dreams come true.

The next two present single-worthy anthems while tracks seven and eight deal with matters of the heart. ‘Too Faded’ and ‘Pain Away’ then discuss issues of psychedelia as a totem of debaucherous enjoyment and as a coping mechanism respectively. The final five tracks then repeat the same topical leanings as the opening four.

Oaks also gives his supporting cast ample room to shine; be it Tay Iwar or the oft-obscure Denzel Oaks who made a rare appearance on ‘Right Now.’ There is also sGaWD whose sonic palette expands with every track that comes laced with her vocals.

That said, the album could have done without records like ‘No Settling’ and ‘Right Now.’ Zilla Oaks should also consider an event with his fellow Apex Village comrades where he performs some of these records, which are perfectly suited to the rage life. ‘Wagwan’ is just a ludicrous record.

For what this tape is, it’s a beautiful sonic experience with beautifully curated instrumentation which houses the progressive story of a young hustler with a mountain of dreams, albeit while battling his demons with drug and alcohol reliance.

Its length almost exposes some weaknesses and Oaks tendency to repeat certain topics in different ways, but the positives of this album far outweigh its negatives.

The album also has wild, funny lines that get you off your seat, screaming!

On ‘Wagwan’ Oaks drops the medical bar, “I’m dope, your girlfriend addicted, she swallowed the whole prescription.” Even he had to repeat the line in amazement.

On ‘Bussdown,’ he also raps that, “I found your ting on Tinder…”

Celebrating his Apex Village goons on ‘Wagwan’ was also a nice touch. Zilla Oaks needs to get paid to A&R albums from a production standpoint because he almost always gets his beats spot on. His producers like ThrillMax, BigFish, ShwOff, Tochi Bedford of 44DB Collective and more.

The beats that birthed records ‘What You Telling Me,’ ‘Wagwan,’ ‘Ogini,’ ‘Bussdown‘ and ‘Still Up’ are simply nasty.

Mercy Aigbe’s ex husband calls her a prostitute as they continue to drag each...

2Baba salutes Wizkid for finding his sound on ‘Sounds From The Other Side’ and...