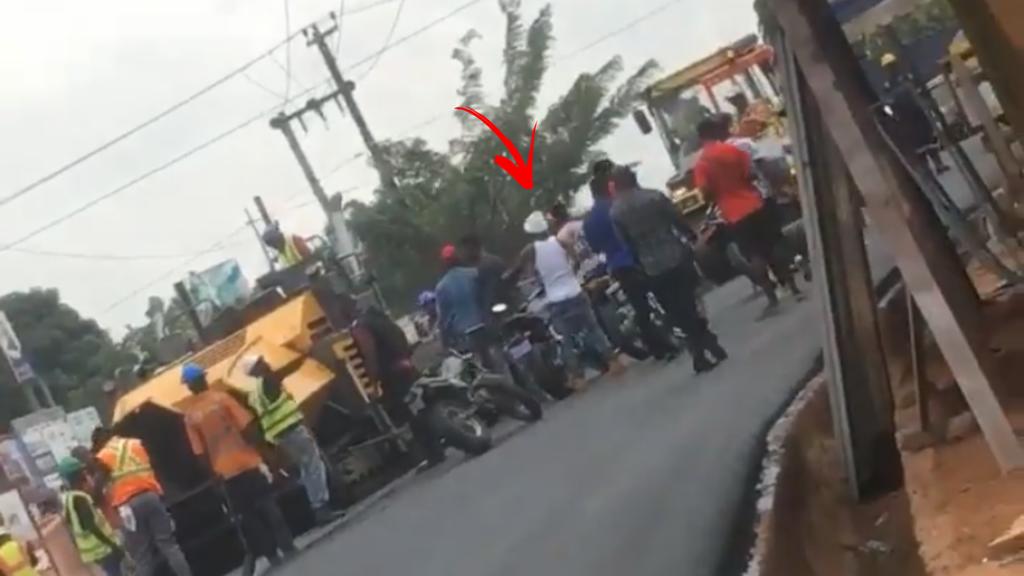 In a video that has surfaced on social media, the dancehall act could be seen in white singlet over Demin jeans and timberland boots standing amidst the crowd whilst an altercation was going on between the boys and contractors.

The narrator in the video below could be heard saying “Shatta Wale dey pri (is troublesome) Jesus Christ, what in squad dey do? Them dey do road he want come pass gidigidi, there norr he go bring Nima squad, what this? see the Nima boys“.

However, another video from the heated moment shows Shatta Wale screaming on the workers to also fix a neglected road close to the one they are working. In the video below, he could be heard saying “come do this same road“.

Tweeps have since been reacting to the videos which have gone viral on the microblogging platform. A Twitter user @ForgiveKwaku wrote “them for lock am” and @kobyjoe3 replied “go lock am“.

Another @Wale_fatawu said “hey don’t fool yourself there have you heard the story side of shatta wale‘ and to to that, @kyekyeku2021 said “Massa stop fooling, he has no right to bring tugs“.

However, whatever started the altercation between Shatta Wale and workers is not known as his team has not officially given any details yet. See the tweets below for more reactions.

Oxlade and Melvitto drop Video for “Wait For You”