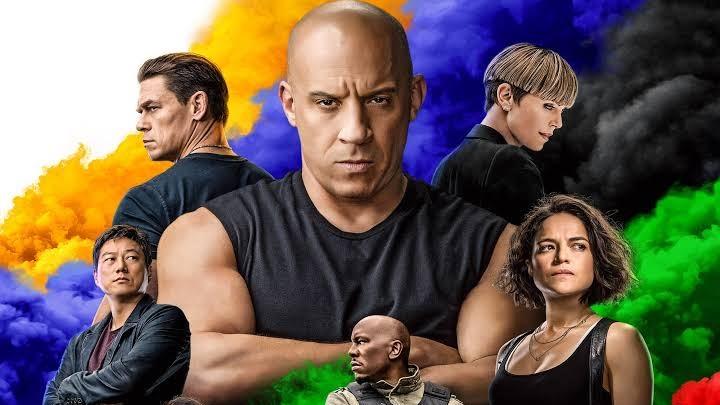 10. Ramsey’s Driving: Shocking! There is a fast and furious crew member who never got her driver’s license. Ramsey in a leap of courage takes control of the steering wheel of a ware truck as Roman and Tej brawl, 2 spies, at the back was scary yet so hilarious. More so her quick thinking activating the electromagnet to kidnap Jacob on the run! Genius!!

9. Han returns: The fast and furious crew has seen a few deaths on-screen and sadly off-screen as well. Whether it was Giselses’s death in F7 or Hans’ in an explosion in Tokyo drift 2006. Han’s shocking return five years in a scene where Letty and Mia are outgunned. Such timing could never be more perfect.

8. Han and Sean’s reunion: Tokyo drift 2006 focused on Sean, but Han’s death was a major cause for arcs to play out. Like everyone who assumed Han was no more; Sean seeing him again and that brotherly hug they gave each other warmed our hearts;

7. Dom’s near-death experience: How Dom is selflessly willing to sacrifice himself for family needs to be studied and how Letty dived feet into the water to rescue Dom who was inches away from crossing the finishing line of life needs to be studied more!

6. Dom VS Jacob: ‘You win this race, you come home with me’ you lose, keep driving! Never return. Words of Dom after he discovered the scheme Jacob pulled to help his father throw a race that cost him his life. Kudos to Finn Cole’s brilliant performance that masked emotions all over his face that can be summed up into one word, Regret!

5. Invincible Roman: The invincibles theory argued by Roman can be explored more as it might just hold some truth. Or not! 12 gunmen against Roman in a pit and he still survived, now that’s next level luck or better still, Invincibility.

4. Jacob joining the Crew: After Jacob’s accomplice stabs him, Jacob switches sides to the crew and aids them in their heroic quest against Cipher. Family sticks together after all.

3. Dom driving off a cliff: Is there anything that Dominic Toretto can’t do with a car?! Because Dom is always pulling a new trick from his sleeves this time; using the word phenomenal would be an understatement. I’ll just say this here because they might have left it out in the post-credits. Don’t try this at home!

2. Jacob’s supercar-jet: Throughout the fast and furious saga, we have seen the evolution of technologies in the automobile industry. A car aligning perfectly with a flying jet within the laws of physics and the creativity of sci-fi dropped our jaws!

Before we get to our top pick Here are some honourable mentions.

As usual Roman does a flawless job mirroring our panic as the flight takes off.

Director Justin lee sure executed a top-notch visual experience as a garage vehicle floats seamlessly into space. In most drives in fast and furious they go fast, but this time it’s slow and steady as Tej reflects on their heroic acts in the last decade; considering this to be their possible last.

Which was your favourite moment in fast and furious 9? Do you agree with these picks? Did I miss any? Feel free to reach out to me to continue this conversation.