Getting ready for the Orange Culture show yesterday was the moment it really hit – Lagos Fashion Week (LFW) was truly back! Arriving at the venue, you’ll quickly realise my excitement was shared by the fashionable guests who attended the event. Seeing fashion lovers alike – dressed to the nines – expecting to be entertained by what turned out to be an amazing show, was a fantastic way to get the fashion season rolling.

Since the fashion label made its runway debut at Lagos Fashion & Design Week 2011, it has consistently used its presence to engage buyers in social activism. Since then, Adebayo Oke-Lawal has pushed his brand forward to become one of Nigeria’s biggest names in fashion. Following the brand’s history of using clothes to ask and answer questions in the same vein, this collection wasn’t any different.

‘Peacock Riot’ aims to uncover stories of isolation, inclusion and the quest for dignity as a collective human agenda. With prints inspired by peacocks, war paint and flowers; “Peacock Riot” was a form of swaying activist in a hypothetically constructed space – “The OC Garden,” a place that is free of prejudice – especially for people who are most vulnerable to societal stereotypes. This garden represents the mental space people occupy before they confront these stereotypes.

The venue, which was tastefully decorated with orange plants, lights and a faux grass runway, looked all shades of this and more! “It is both an important time to have a voice and to use it, and for this collection, it was necessary to investigate our surroundings and find tools that although are commonplace and random, are still used to profile and further marginalise people in our society,” echoed Adebayo Oke-Lawal, the label’s creative director says on the inspiration behind this collection.

Up until this moment, the brand has garnered international acclaim for its androgynous style and willingness to push boundaries with pieces made from ethically-sourced local fabrics. From handwoven macramé to upcycled lace trimmings and denim, to custom prints – including the brand’s first logo print – this collection is a “representation of different variations of generations and styles of the forefront of activism.” Highlighting political campaigns through fashion activism, Orange Culture S/S 22 collection incorporates colour, texture and patterns to bring to the foreground the different groups of people that rallied together to fight for arguably the most important cause of 2020; ENDSARS.

By playing on the stereotypical narrative that identifies us as a people, Orange Culture aims to tell a story about the beauty in the stereotypes placed on the youth. 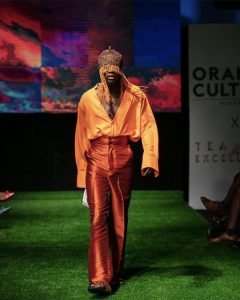 One after the other, jaw-dropping pieces are being sent down the runway with eyes following with rapt attention – all these and more tell-tale signs of a fully engaged audience. Talented stylist, Daniel Obasi, was tapped by the fashion label to bring its pieces to life. It’s clear that they were very intentional in the choice of styling elements such as colourful tights, durags, and skin – utilising sartorial choices that were previously used to antagonise androgynous dressers as a form of fashion activism. “It is about normalising differences, rather than approaching it with the kind of fear that eventually leads to harm.”

However, yesterday’s hot button fashion event didn’t stop at fashion and activism for Orange Culture. It was a “music meets runway” situation as artists such as Falana and Lojay performed at “The OC Garden,” both deliciously clad in outfits from the brand.

With congratulations and applause filling the air at the after-party, it’s safe to say Lagos Fashion Week is off to a great start thanks to Orange Culture.

10 most popular celebrities of the year [Pulse Picks 2021]