Home Entertainment Who Get Ear Vol. 134: Here are the 10 African songs you... 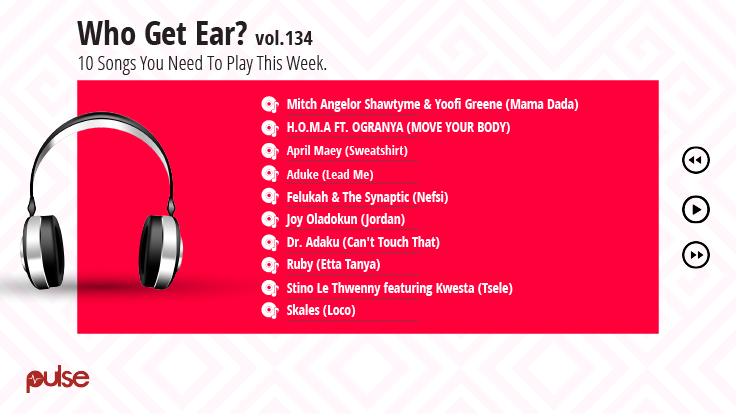 This is the 134thinstallment of this feature listicle. It is now available on streaming platforms, Audiomack and Apple Music.

You can check Vol. 133 here. This week, we feature Skales, Felukah, Dr. Adaku, Ruby and more.

Pick of the week: Skales – Loco

Moment of the week: TBD

Here are our picks of the week;

Already playing a key role in African music as professional dancers and choreographers, Mr Shawtyme and Yoofi Greene officially make their joint debut as recording artists with “MamaDada”, which features the DWP Academy and DJ Flex.

‘Move Your Body’ is the second single off H.O.M.A’s debut EP The Quintessence Of Vogue. The Killer producer-produced contemporary Afrobeat song features the sensational Ogranya.

A song in which he appeals to the pride and sensuality of a woman in an African way of ushering her to the dance floor where all walls are let down in a euphoric routine of body movements.

The song is a carefree hip-hop-influenced song in which April Maey expresses herself to the world. It is also a daring but expressive tune because who cares if you wear a sweatshirt when it’s 41 degrees outside, or if you wear sunglasses at a nightclub. Be you and be true to who you are.

British-Nigerian Singer, Aduke has released the visuals to her single titled “Lead Me” Off her Debut album, Peace And Light.

The artiste who was selected to be in the International forum of the Theatertreffen in Berlin was one of the 2 Artistes from Sub-saharan Africa selected before the show was postponed due to Covid in 2020, plays Afrobeat and has shared stage with notable artises like Femi Kuti, Seun Kuti, Ade Bantu, Nneka, Ekow Alabi, Ebo Taylor, In ‘Lead Me‘ Video, Aduke transcends into the beginning of another journey after continuing from experience.

An Alternative song, it drops off as the final track on American singer, Oladokun‘s album, In Defense of My Own Happiness. The song discusses the nomadic tendencies that comes with a search for happiness.

Dr. Adaku is a PhD holder and singer/songwriter from London, UK. Two weeks ago she released a new single titled, “Can’t Touch That” about the important topic of consent, entitlement and catcalling, delivered in a catchy manner – Afrobeats (Afro-Pop) with UK rap/grime vibes.

A sensation in North Africa, this song deserves your attention. Already, its lyric video has over 80 million views in less than three months.

A minimalist Hip-Hop record, it builds on the braggadocious tendencies of Hip-Hop to make a sensation record.

‘Loko’ is such a soothing and beautiful record and it sees Skales at his best, rising above pop synths to deliver vibes above a sonic cruise.

Princess Shyngle says there is no such thing as a man and woman being...

The Wisemen Crew – To The Moon